Do nothing out of selfish ambition or vain conceit. Rather, in humility value others above yourselves, not looking to your own interests but each of you to the interests of the others. Phil 2:3-4

This week was the 47th anniversary of D-Day.  Two Summers ago, on a weekly basis, a group of rising freshmen and graduating HS seniors gathered around the fire pit in our back yard at sunset to watch the HBO miniseries based on Stephen Ambrose’ Band of Brothers projected on our neighbor’s wall.  The historically faithful chronicle follows Easy Company from their courageous parachuting onto the beaches France on D-Day morning to the capture of Hitler’s Eagle’s nest.  This was the last Great Generation, ready to risk it all for the sake of others liberation.

I recently had the privilege of accompanying a retired Major General to Parris Island, to see the training that Marines go through at 13 weeks of boot camp. In addition I was able observe the stations of the Crucible, which I had read so much about and the Major General had invented and instituted.  Finally, we were given VIP seating as we watched the graduation of 200 young men who were committed to serve our country as a Marine.

So much of what I have studied about emerging Missional Leadership Training was evidenced in every person and place within this Marine production facility.  Just inside the security gate the first sign one sees is the mission statement of Parris Island “We Make Marines”.

Interestingly enough, I found myself just two weeks later, a bit exhausted from my work schedule and hoping to hang out poolside for a relaxing Memorial Day weekend (a holiday which is not about me).  When I found those expectations unmet, I really wrestled internally with my feelings of “deserved rest.”  This conflicted feeling coupled with the reality that I was readying to teach an online summer course on “The Theology of Servant Leadership” not only compounded my sense of need for rest but also revealed my ever-present selfishness.

Sociologists would say that I am cut from the cloth of The Boomers, the Me Generation and most likely you would find us more self-absorbed and focused on self-gain and self-fulfillment than selfless servanthood and certainly with little connection to the last Great Generation. Sociologists Howe and Strauss in their studies on generational and historical “turnings” would point out the current global unrest is aligned with a generational flavor among the generational Millennial Mosaics.  These, the next great generation, who populate our middle schools, high schools and universities are activistic servants – postured to positively impact a frayed globe.  It is no surprise that the Middle East is experiencing the death of self-focused, despotic leadership – that chapter is ending. However, the question is has this rising generation been infused with a Kingdom perspective to take the reigns of leadership and correct the course, or is the situation merely ripe for extremist infiltration into leaders. Who serves the role of Parris Island for the Christian church? Who is making Spiritual Marines and are all Christian marines able to use their offensive weapon, the word?  Who is shaping and encouraging the next Easy Company of missionaries to risk it all for the sake of the kingdom? 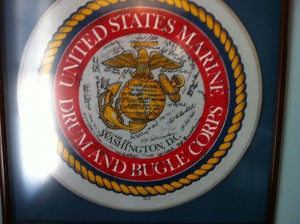 This week, I began teaching my online class which is built upon Philippians Chapter 2. Last night we gathered again with a group of young men and began to watch “The Pacific” which tells the intertwined stories of three Marines during America’s battle with the Japanese in the Pacific during World War II.  I believe that these boys intuitively understand the heart of servanthood and valor and could just be the next great generation.  If you are that generation, then keep up the great work!