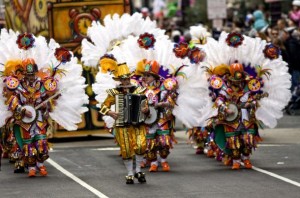 And he that sat upon the throne said, Behold, I make all things new. And he said unto me, Write: for these words are true and faithful.  And he said unto me, It is done. I am Alpha and Omega, the beginning and the end. I will give you a thirst for the fountain of the water of life freely.  Those that overcome shall inherit all things; and I will be their God, and they shall be my children.”   Revelation 21:2-7.

It’s a sacred moment of second chances, an annual, natural place to pause, hit the reset and at least feel like there is a do-over – it’s New Year’s morning.  Whether celebrated with the traditional TV Countdown, at a party or recognizing it the next morning because you were too tired to stay up to watch the ball drop on TV, I think most people take at least one moment during New Year’s Day to reflect on the past and think towards the future. This moment, whatever we want to call it can frame a daily spiritual exercise that can positively shape any leader’s life.

The New Year’s celebration extends way back in history and at one time recognized crossing the threshold into the spring equinox. As Roman calendars changed, the connection to the Solstice was lost, and the arbitrary date of January 1 was not established by Roman rulers until the first century BC. Originally condemned as a pagan celebration, it was eventually adopted as a holy day and has been celebrated as a holiday in the west for the past 400 years.

I grew up just outside of Philly celebrating New Year’s Day by watching the Mummer’s Parade broadcast on TV. For those who have never experienced The Mummers Parade; it is Mardi Gras, a marching band including banjos and basses, and good old South Philly fun all rolled into one. It’s a Euro blend of 400 year old heritage that resulted into an annual event to ring in the New Year. The Mummers Parade even has its own theme song and dance. One of my greatest memories on New Year’s was enduring the arctic cold and watching the daylong parade first hand as the celebration of a new beginning happened all down and all over Broad Street! (for more on the Mummers check out: http://mummers.com/)

Last week, my son and I were watching TV when we saw an eyewitness video of a teenager escaping a near death experience on a ski lift.  Already thinking about this New Year’s blog, I was able to connect with this young man, now in college through Facebook and asked him to reflect on how the incident affected him.  One of the things he said in response was that he did not know if he got a second chance.  I was a bit surprised because I try to see every sunrise and every New Year’s Day as an opportunity for a second chance.  Second chances go hand in hand with opportunity for change. Read about my friend Micah’s death defying second chance at 16 years old.  No doubt he is convinced of his purpose on the earth with his second chance; http://www.vaporsports.org/about-us/our-story.

I remember a scene from a Bruce Willis Movie  “16 Blocks”, where early in the movie, Bruce Willis’ character, a tired and disenchanted policeman states “Days change, seasons change, people don’t change” – the movie ends with his premise being disproved because he witnesses a dramatic change in a former criminal, whom he had written off.  The bottom line is that we all get a do-over.  When I was a kid, if there was any discord in our family, especially among my siblings and I, my mom would make us say we were sorry, help the offended offer forgiveness, reestablish relationship and then memorialize the moment by saying “Now let’s start the day over.” Billy Graham was said to have answered a reporter’s question of “What is the secret to your longevity of uncorrupted ministry? with the response “Daily confession and repentance.” So the secret is that because of Jesus and His death on the cross, every day can be a do over.  The psalmist tells us that every morning God’s mercy is new.  The Apostle Paul tells us that “in Christ” we are made new. Take a moment, check out this song; http://www.youtube.com/watch?v=uumI-PdeZzY&feature=related and as you listen remember that “If I confess my sins, God is faith and just (because of Jesus’ death on the cross) to forgive me of my sins and purify me from all my unrighteousness.” 1 John 1:9. The fact is, that in Christ, we do get do-overs, every day. Every day can be New Year’s Day!

For those who are emerging as the Next to Lead – I challenge you to live every day as though its New Year’s Day – full of promise, possibilities and second chances – remember daily confession and repentance is the key to a sustained and uncorrupted ministry. So Happy New Years and keep up the great work!