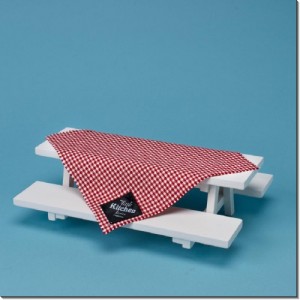 I am writing while visiting my parents in Florida during the kids’ spring break.  Visits these days always involve early meals, some nostalgia from growing up and some clarifying of family lineage. I come from a traditional Trenton/Philadelphia Irish Catholic family on both sides.  Growing up we celebrated a lot of holidays, birthdays, and graduations etc at our house with lots of cousins.  If a meal was involved (it often was) and extended family was over (they often were), then we had two tables going to accommodate the crowd; the adult table in the kitchen (which is in our house now) and the “cousin’s table” through the sliding glass doors on the enclosed back porch.  The cousin’s table was no more than the picnic table with a gingham table cloth on it – but the rule was, you can’t sit at the “adult” table until you were married. Picture Tom Hanks in “Big” eating the mini ear of corn at the kiddy table and that was me at nearly 28 years old at my last Thanksgiving at the cousin’s table.

Easter was usually a time that we sat at the “cousin’s table”, with its predictability about the impending meal of a ham, deviled eggs, Aunt Patty’s famous macaroni salad and the Bunny Cake.  Even more predictable were the lively dialogue around the adult table and the high spirited laughter and little content around the cousin’s table. I loved the cousins table because everyone around it was generationally connected, there existed a wonderful sense of momentary autonomy but we all quietly looked forward to sitting at the adult table where real life, deep issues and meaty conversation happened.

For many in the Next2Lead category, leaving the cousin’s table is uncomfortable and scary.  Frankly, the metaphoric adult table of today’s world has not proved to be trustworthy or even worthwhile and so it is understandable that we are seeing a Failure to Launch syndrome (see the article I wrote about that here) or aPeter Pan syndrome emerge as a result.  Many sociologists have been writing about this struggling group of rising leaders, some like James Cote say that it is a case Arrested Adulthood , a paralysis due to fear, too many choices, or the seaming reality of an unappetizing and unfulfilling next life chapter. Others say it just takes longer today to navigate what David L. Brooks calls the Odyssey Years.   The fact is that we need what Jeffrey Arnett calls Emerging Adults , to realize that it is going to be hard, but they are desperately needed to step up to the plate and lead now!

In his book, Leadership is an Art, Max Depree states that the “number one job of a leader is to define reality”. Being a hopeless optimist, I had to read that quote many times in order to begin to let it sink in.  Living in pessimistic and fearful  avoidance or comfortable status quo both lead to risk aversion but living in over-optimism, blinded by uncalculated hope can also lead to suicidal and often preventable failure. The key is defining the reality of what the moment holds both with opportunity and threat and to proceed without paralysis, but with as few surprises as possible.  Jesus was priming the pump for the future leaders of the faith by clearly laying it all out in from them on that first Holy Thursday.  Whether they liked or not, the disciples had left the cousins’ table and were preparing to launch into Missional leadership at the adult table with Jesus. Jesus’ last meal was intentionally spent around a table with his hand selected protégés – those next to lead.  For him there was no B plan and so in a both familiar and memorable manner he laid out the reality of them taking the lead at what we call the Last Supper which we celebrate on Holy Thursday.

… and he took the bread, blessed it, broke it, gave it away to his disciples saying ‘this is my body broken for you – as often as you do this, remember Me … Luke 22

Jesus’ defined the paradigm for those whom He had chosen as his Next2Lead to be successful.  The message was clearly encapsulated in the description of the eyewitness and has been memorialized as all Christians in some form or another – regularly re-creating this last supper around a communion table – the adults table.  Henri Nouwen expounds upon this notion in his work The Life of the Beloved. In a single moment, four emphatic words he outlined the recipe for real Missional Leadership: TAKEN, BLESSED, BROKEN and GIVEN AWAY! It was the journey He would soon embark on, Jesus, who was blessed by God, broken on the cross, and given to the world as the ultimate sacrifice and payment for our sin. It is also the roadmap of the next2lead journey.

My challenge this Easter for those who are “Next2Lead” is to launch from the cousin’s table (whatever that may be in your case that is keeping you comfortable) and go in the reality that leading the movement for followers of Jesus will be no less challenging today than it was around that table – you will be called to be fully TAKEN by his loved, BLESSED by the power of the Spirit, BROKEN in regards to Self and then GIVEN AWAY to a world that awaits authentic servant leadership.  As often as you do this, you remember Jesus and then you act just like Him!

Keep up the Great Work!